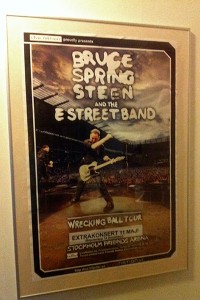 Just when the fans thought the tickethunting was over, more news came about the swedish shows. Since the two concerts had sold very well there would be a third one on May 11th! It feels a bit strange that the band would play two shows, have a week off and then come back. As it has turned out, there will be a show in Finland between the three swedish gigs, so the band will be busy.

A week after the first tickethunting it was the same procedure all over again. I got up early in the morning, put on all of my warmest winter clothes, took the subway to the Globe arena and went in line for tickets. This time it was even fewer people around. Everything went smoothly and I got the tickets I needed for my self and for some friends who wanted help. We were waiting around for a while in case they would annonce a fourth show, but luckily that didn’t happen.

I got my self a poster on the way home, it now hangs on a wall in my study.