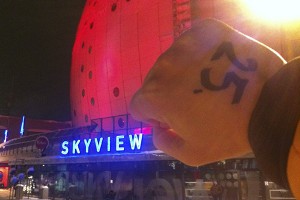 When the news broke that Bruce Springsteen and the E Street Band would tour the world once again in 2013, nobody was surprised. But maye we were a little bit surprised Bruce would comeback so soon with the same album, Wrecking ball. Whatever. He is coming so I just have to get tickets.

The date for the ticket release got out, and it was clear Bruce would play the new venue, Friends arena in Solna, just north of Stockholm. First it was just one show on May 3rd. But as we were waiting a second show on May 4th was announced.

I went to cue for tickets at the Globe arena. I got there just before 6 o’clock in the morning and I got nr 25 in line. That was good, and I could get tickets to the first show. After that we just got back in line to wait for tickets to May 4th. It wasn’t so cold although it was snowing, and by 11.30 me and my friends had our tickets.