In 2015 Bruce Springsteen released the box ”The Ties That Bind – the River Collection”. It’s a remastered edition of the River and  some outtakes that never ended up on the double album. The outtakes are really good an fun to listen to.

This naturally lead to a tour, first indoors in the USA 2015. This year, 2016, the tour came to Europe and outdoor arenas. Sweden got three shows, all of them at Ullevi, Gothenburg. First two shows 25th and 27th of June, then the last one on July 23rd.

The first one didn’t quite catch me, I thought it lacked a story to keep it together and I had a hard time to feel the spirit and joy. The second one was totally different, much more playfulness, a lot of power on stage and a really good setlist. The last one was very good also as we got The River album from top to bottom. The finale was Twist and Shout and all was grand. I like the sad songs, and Point Blank, Fade Away, Stolen Car and Drive All Night have rarely sounded better. After the first show I felt almost like me and Bruce had fallen out of love, but from the second show all was back to normal again. The joy, the spirit, the great feeling and the surprise of what song to play next was all there. At 66 years of age Bruce Springsteen and the E Street Band still is the greatest live act there is. They sure do rock’n’roll! 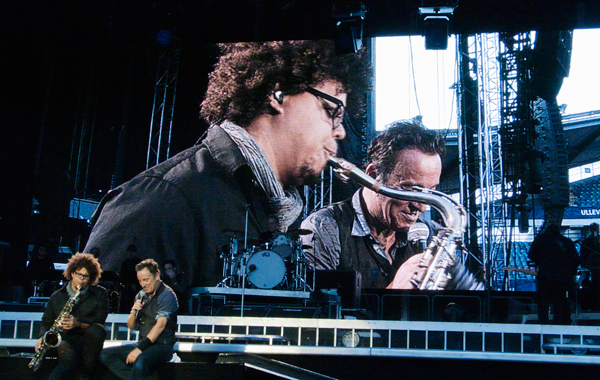 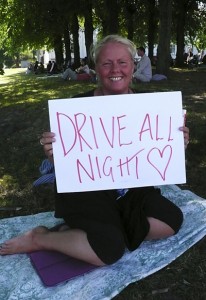 After the amazing show the night before, everybody was wondering how Springsteen and the band would top that. But as it turned out, they had many surprises up their sleeves.

I felt a bit knocked about after the first gig, the weather had been hot and the show intense, so I was kind of tired on Saturday morning. I did my best to drink a lot of water and felt better when the tension in my muscles went away.

Ingela and I did some filming, talking to people about their requests and interviewing a young girl about being a newborn Bruce fan. A lot of folks at the swedish fan forum have noticed the generation gap and how the younger fans in their teens and twenties are starting to get out on the road. It’s fun to see that the music attracts the younger ones!

When it came to queing, there were a bit of confusion since the list from Friday was on for Saturday too, while others had formed another line. For most part of the day it was hard to know which list to stick to, so many people got numbers in both lines just to be sure. Apparently this also started a very animated debate on the web forum springsteen.se with fans discussing back and forth on the subject.

Finally, the leaders of the two lines and the security staff agreed to line people up. The ones that stuck to the first line and the 249 who was first on the second list were lined up in rows of seven. Then seven people from eachline were given wristbands. We sat down and when the gates opened everybody walked in just like the night before. The last procedure with the wristbands and the entrance went nice and smooth. It’s just a pity there had to be so much fuss before that.

During the sound check Drive all Night were played again, together with Roulette. When the show finally started two things were different from the night before. First, the people on the stands were much more active, clapping and cheering. The second thing was that EVERYTHING was different. 16 songs that weren’t played the night before! The first show had 27 songs, the second 28.

They opened with Night, No Surrender and Lonesome Day and then burst into Hungry Hearts where the crowd did ther singing part very well.The whole night was just an immense party. We got Summertime Blues, Waiting on a Sunny Day, Working on the Highway and Girls in their Summer Clothes. It seemed like the band wanted to bring out every song anybody possibly could want. We got Backsttreets, Janey Don’t You Lose Heart, and Roulette. But the one and true pearl was Drive all Night. After three sound checks and numerous signs they did finally play it! It was very moving and a great moment.

After Badlands it was all party again, the crowd couldn’s stop singing, hopping, shouting and enjoying themselves. After a set with Thunder Road, Born To Run, Bobby Jean, American Land the band said their thanks. But Springsteen came back with a sign and said “We couldn’t possibly play this. It is the stadium breaker…” But of course they played Twist and Shout and everybody went bananas. 😀

There was a whole lot of love in the air and during the show Springsteen thanked the crowd for their support over the years. This show sure was a beautiful reward for all that. 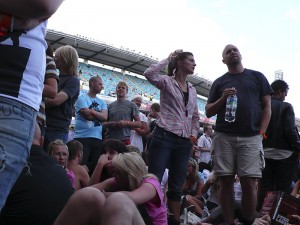 The next shows on my mini tour was to be the double in Göteborg. Scheduled for the 4th and 5th of July this naturally brought high hopes concerning the setlists, and my – we surely got something out of the ordinary.

For the first show I arrived at the arena just before six in the morning. I got number 348 and it turned out to be a good one, since the first 419 people were the ones who first got the wristbands. The communication with the security staff went very well, we had our roll calls, and the usual stuff.

Ingela came around lunch time, she did some filming while I was being interviewed by the local tv for their news programme. Then we decided to leave the filming to the next day, because I soon had to take my place in the line.

It’s always fun to be in Göteborg for a big stadium show, last time in 2003 the two concerts were incredible. There were many people from the swedish fan forum, Springsteen.se. We chatted with friends and then got in line. Finally we got our wristbands and the first two hundred people were let in, they walked in number order. In my group, people weren’t that disciplined, but we all walked calmly and I got a very good spot anyway. I was in second row at the left corner of the right catwalk.

The waiting in the pit was not so boring, I spent time talking to a couple of forum friends next to me. Everybody in the pit was excited, we had heard Born in the USA and Drive all Night during the sound check. When the band came on stage they started with BITUSA and everybody just went nuts. For me it was a great moment, just being at Ullevi, hearing the 1985-version of the song and thinking about that those showes actually broke the stadium… Wow! I had goose bumps all over. 😀

Ingela was a bit further back, but we both had a great time. The band played Independence Day, 4th of July and This Hard Land in honor of the american National Day and they were truly beaming with joy. We also got Be True, Atlantic City and Cadillac Ranch. The encores brought Rosalita and Seven Nights to Rock, so it was a real house party.